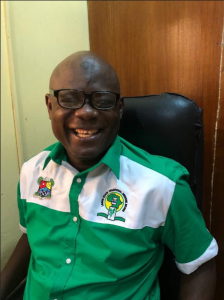 He was a member of Review Committee on Environmental Laws of Lagos State and Study Group on the Identification and Designation of Ramsar Sites in Lagos State. During his sojourn in the United Kingdom as an MBA student while on study leave between year 2009 and 2011, he worked at GBM Support Services, and Initial Transport Services, United Kingdom therefore affording him the opportunity of understanding the concept of national culture, management in diverse/wider environment and organizational diversities.

He has the singular honor of being the youngest and most junior officer as a Grade Level 9 Scientific Officer at the Lagos state Ministry of the Environment, Alausa Secretariat to represent the State at the National Council on Environmental meeting held at Calabar in 2005 (The highest Organ of decision making on Environmental matters in the country). States are usually represented on the Council by Honorable Commissioners for Environment and Permanent Secretaries of the Ministry of Environments.

In his current position and short stint as the Coordinating Director of the Board, he has turned around the fortunes of Board in the areas of change in organizational culture, introduction of innovative programmes : Medical outreach and Stress management course into the curriculum of the Six Weeks Orientation Training Programme for Traditional Medicine Practitioners in the State; constitution of Task Force for the monitoring of Traditional Medicine Practice in the five geographical divisions of the State (IBILE); resuscitation of Epe divisional office of the Board; resuscitation of collaboration with NGOs and development partners locally and globally; publication of newsletter;and tremendous improvement in the Internally Generated Revenue of the Board.

He is the editorial Board Chairman of the Board’s newsletter a bi – monthly publication showcasing the practice of Traditional Medicine in the State. He is an avid reader with great passion for knowledge acquisition,loves listening to music, adept at managing interpersonal relations activities and enjoys playing football.
Some of his publications include : Isolation of Albumins and Globulins from Cowpeas (Vignaunguiculata) and Beans (Phaseolusvulgaris); Production of Alcohol from Cassava and Potato peels using salivary Amylase and Amyloglucosidase; The impact of Incentives on Employees Performance: A case study of Lagos State Ministry of the Environment, Alausa Secretariat, Lagos, Nigeria; Reconnaissance Survey of Wetlands in Lagos State: Report prepared for the Wetland Management Unit, Department of Conservation and Ecology, Lagos State Ministry of the Environment in 2016; The role of Traditional Medicine in the Universal Healthcare Delivery System in Lagos State amongst a host of others.
He is a devout Muslim and happily married.